In early spring of 1987, a small group of expats placed an ad in San Miguel’s weekly newspaper – Atencion – seeking other liberal souls with the goal of establishing a local UU Fellowship.

In the beginning, 10 of those liberal souls held meetings in a home, but in no time they had to find larger space for the budding organization.
Contact with the UUA was made, they wrote a constitution and bylaws, and had their first annual meeting on February 27, 1988, where the first Board of Directors was elected. Thirty-five individuals were named as charter members, and the Fellowship received its charter in May 1988.

Little by little the congregation grew in number and confidence. The work of the program committee attracted even more people through the excellence, informative, compelling, and sometimes controversial programs.

From mid-1988 to 1993, the membership moved several times to keep up with its growth. Finally, in August 1993, UUFSMA found its way to its present spacious, bright room at the Posada de la Aldea on Ancha de San Antonio. Sunday services, benefit concerts, amateur theatrical productions and other special events were held there throughout the 90s.

Music! Music! Music!
In 1995, member George Bell (deceased), began a piano fund which resulted in the purchase of a fine Bosendorfer grand piano. Last time you were at the Aldea for a service, did you notice the piano at the front of the room? It’s the same one!
Many have played enthusiastically for Sunday services over the years. One those early members was Elsmarie Norsby, who is still a member today!

By the spring of 1996, the Board and Finance Committee confirmed that our treasury held sufficient funds to permit a serious program of outreach to aid the Mexican community in and around San Miguel. Through their generosity of spirit and action, the outreach committee took shape and began support programs for local causes.

It began with a grant to Feed the Hungry, an organization that provides nutritious meals to school kids throughout San Miguel’s rancho communities. Other organizations were added to the portfolio of social action and service, including Centro Infantil, Mujeres en Cambio, CEDESA, the Center for Global Justice, Ojala Niños, and Libros para Todos. The Fellowship supports these organizations to this day.

In early 1997, after just 10 years, the nucleus of 10 had grown to more than 60 voting members and some 50 Friends of the Fellowship. Sunday attendance including members, part time residents and visitors, hovered around 100 in the busy winter season, and frequently around 50-70 in the summer.

Since those early years, the Fellowship has enjoyed activities like Wednesday Comidas, Circle Cenas, and a ‘meet and greet’ after services. Also, fresh flowers at the podium has been a tradition since those days. Even Karma mail existed then – members offering to take letters back to the US and Canada and post them.

The Fellowship was the largest and by far the most active UU group in all of Mexico. In addition to its outreach programs, the Fellowship was a contributor to DIF, the federal organization to aid the needy on a local level.

The Fellowship chose to rely on talks by local writers, artists, doctors, organization spokespeople, fellowship members and experts in various fields. Once in a while in those early days, a panel of UU members presented personal topics such as ‘Getting to know us – Why I live in SMA’, ‘What I Believe’, and ‘What Freedom Means to me’.

Shhhhh!
Congregants’ enthusiasm began bubbling over into talking during the music and applauding. At the top of the Order of Service was a note reminding people to be silent during the music, and a request for no applause until the end of the service. Sound familiar?

Individually, most UUs volunteered hours of time each week to benefit a number of organizations aiding the elderly, needy and handicapped children, schools, scholarship funds, the Biblioteca and many other causes.

For the 10th Anniversary of the Fellowship, a commemorative silver pin was designed by local jeweller David. They sold for $15. Are any around still today?

Among the future goals at that time, the Fellowship worked to continue stable membership growth, a secure a financial base, reinforce a strong, responsible outreach program, continue informative, spiritually and intellectually stimulating programs, fundraise through a series of quality musical events, foster a strong sense of community and mutual support in Mexico, and provide a welcoming spiritual environment, with a dedicated, optimistic and open view toward the next ten years and more.
​
Did we get there? Stay tuned to read about the next 10 years in a November edition of the newsletter and on the website! 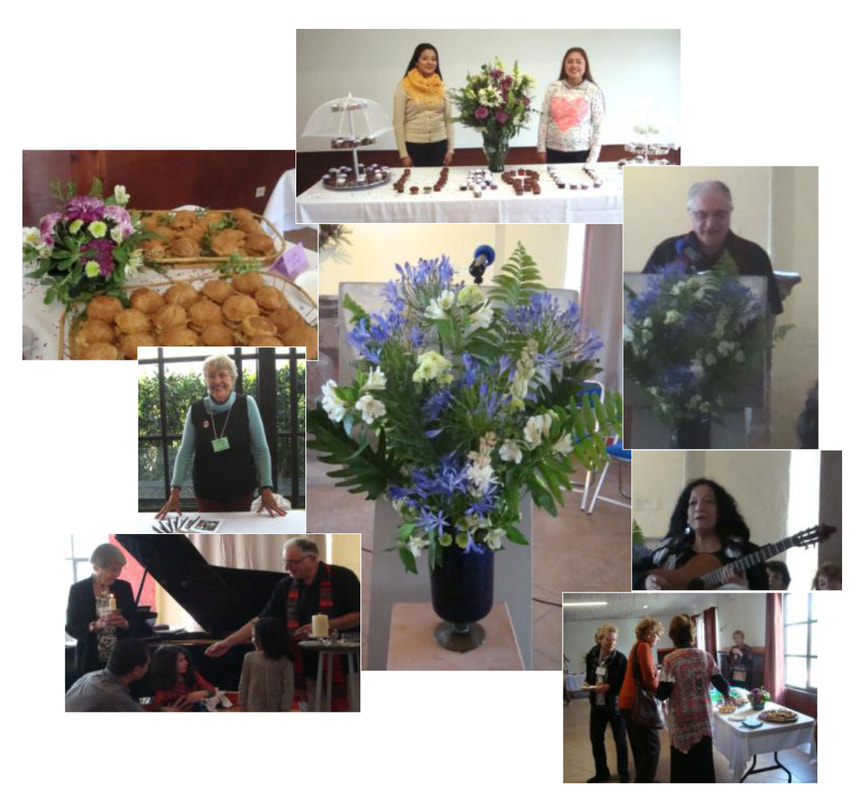